Will XRP become the next go-to crypto for online shopping?

On February 1st, 2019, we launched XRP payment processing service for our merchants. And, after a few months, we noticed something we didn’t expect to witness. 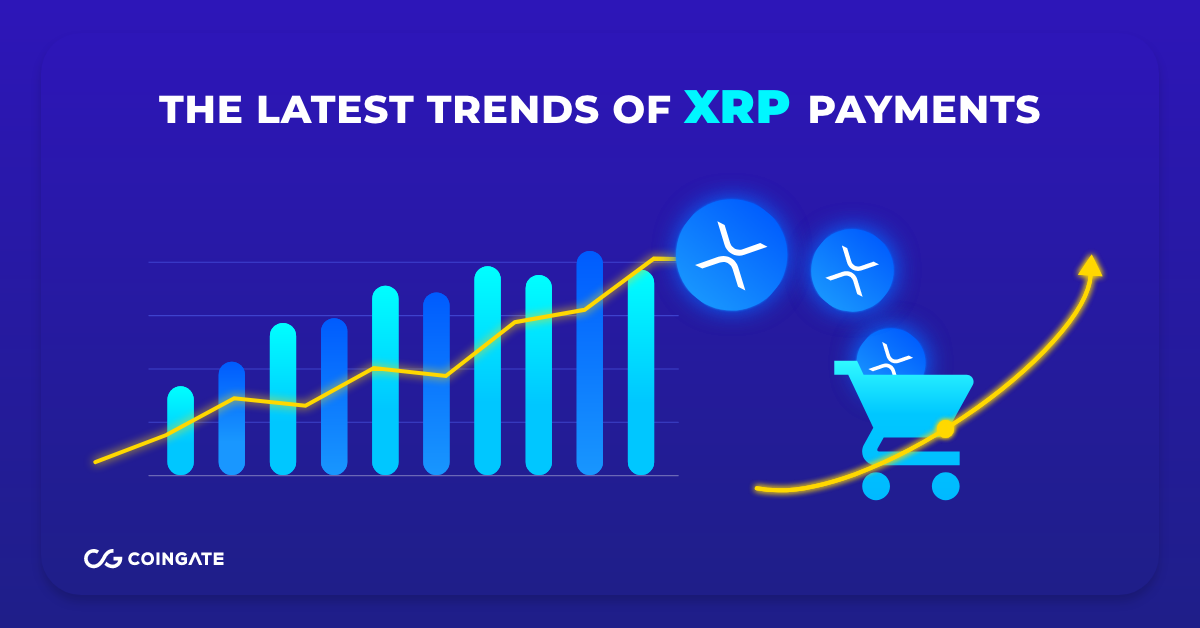 A coin we had just integrated performed better than all our other newer additions altogether. In other words, XRP got immediate traction amongst shoppers, and that traction kept growing.

Besides, XRP community has always expressed immense excitement when speaking about merchants accepting XRP payments, and its positive reaction to our announcement was the first sign that we made the right choice in selecting our integrations.

Big news for #XRPcommunity and our merchants alike! We launched native $XRP support to our customers, meaning #XRP is now accepted as payment at thousands of vendors across the Net. Proceed to our blog for more detailed information! https://t.co/MnY2n6onDH pic.twitter.com/BYTxROGrpx

And we did make the right choice! According to our internal data, XRP is now the 4th most used cryptocurrency on CoinGate in terms of overall payment count, and 3rd in terms of average monthly volume.

But that’s just the tip of the iceberg. We’re going to delve further into the metrics and see how these payments have performed from the very first day on CoinGate until now, including settlements, payment growth over months, average cart size, and more.

There are two reasons why we believe XRP payments will continue to grow – social and technical.

First off, XRP boasts of numerous vocal advocates online that rush to discuss it, educating others about the technology and fostering broader adoption. The amount of support XRP gets is nothing but fascinating, and, from what we’re seeing, it doesn’t seem to decrease over time. 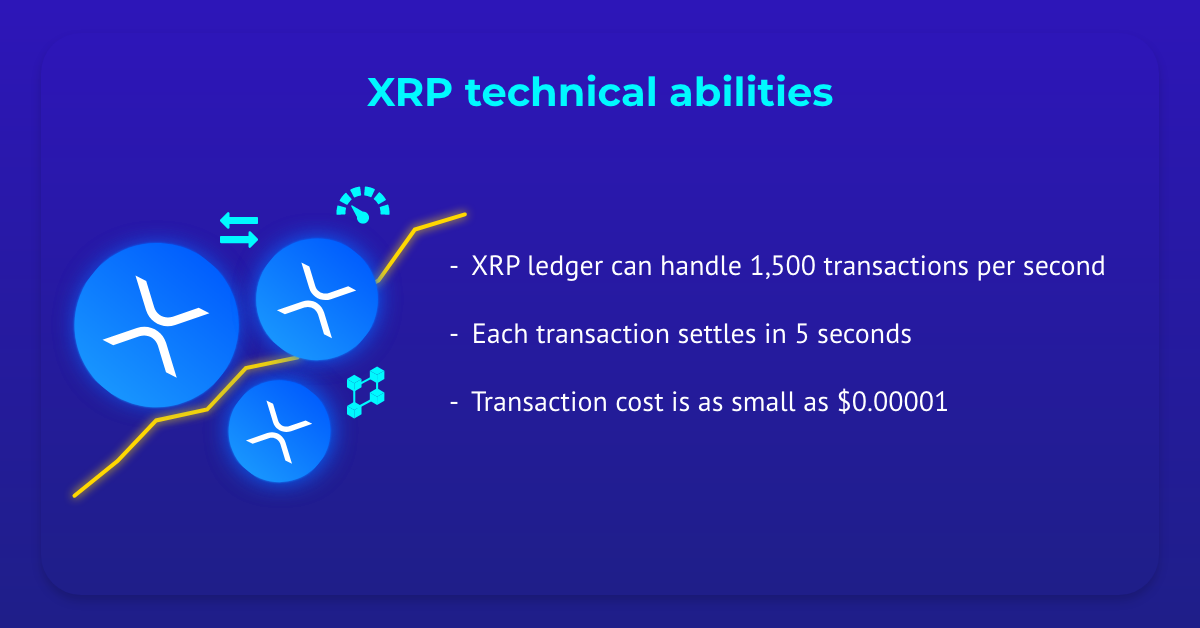 But, more importantly, XRP proved to be a perfect fit for online shopping, considering its technical properties. Currently, its ledger can handle 1,500 transactions per second, where each transaction settles in 5 seconds and costs only 0.00001 XRP to execute.

Dedicated wallets like Toast compliment the ledger even further, adding the extra security and convenience for XRP users that don’t feel comfortable keeping coins on custodial exchanges. However, you can pay with XRP for products or services via an exchange if you wish to, because transactions still settle quite fast – every minute, to be precise.

With all that in mind, let’s jump right into numbers and see how well XRP payments did in the past nine months, or ever since we’ve started supporting them.

First off, let’s go back to the beginning when we processed our first XRP payments. During the first month, our merchants collected 388 XRP orders, which at the time had accounted for 1,36% of total monthly payments made via CoinGate.

Even though it might not sound like much, none of the other digital assets that we have integrated around the same time got such an immediate reaction from the crypto community like XRP. And that indeed says something. 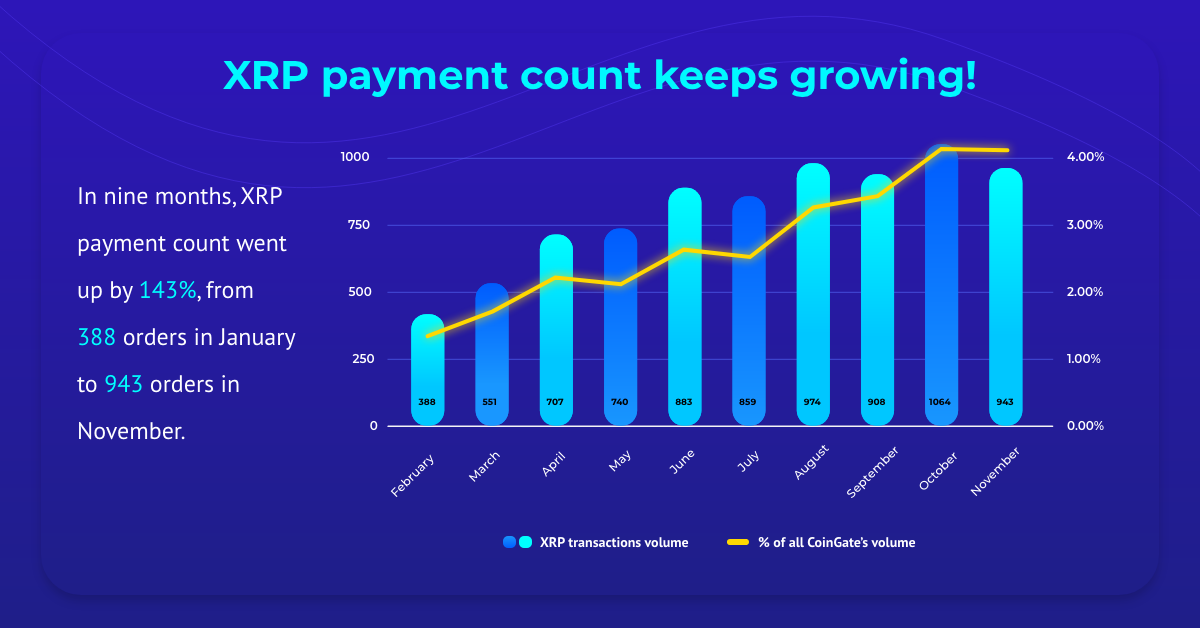 The big picture kept getting prettier until XRP payment count reached its peak in October, totalling in 1,064 orders and accounting for 4,06% of all monthly shopper payments on CoinGate. That is 174% raise in payment count since February!

Lead to a perfect chance to introduce cashback feature

Since day 1, we couldn’t ignore the traction XRP got, so we began to look for ways to provide more incentives to use it as the go-to currency for online shopping.

It so happened that at the time we were in the latest stage of developing the cashback feature. So, we thought why not try it out on a currency that’s catching most eyes, maybe give it a little boost along the way? And so we did. 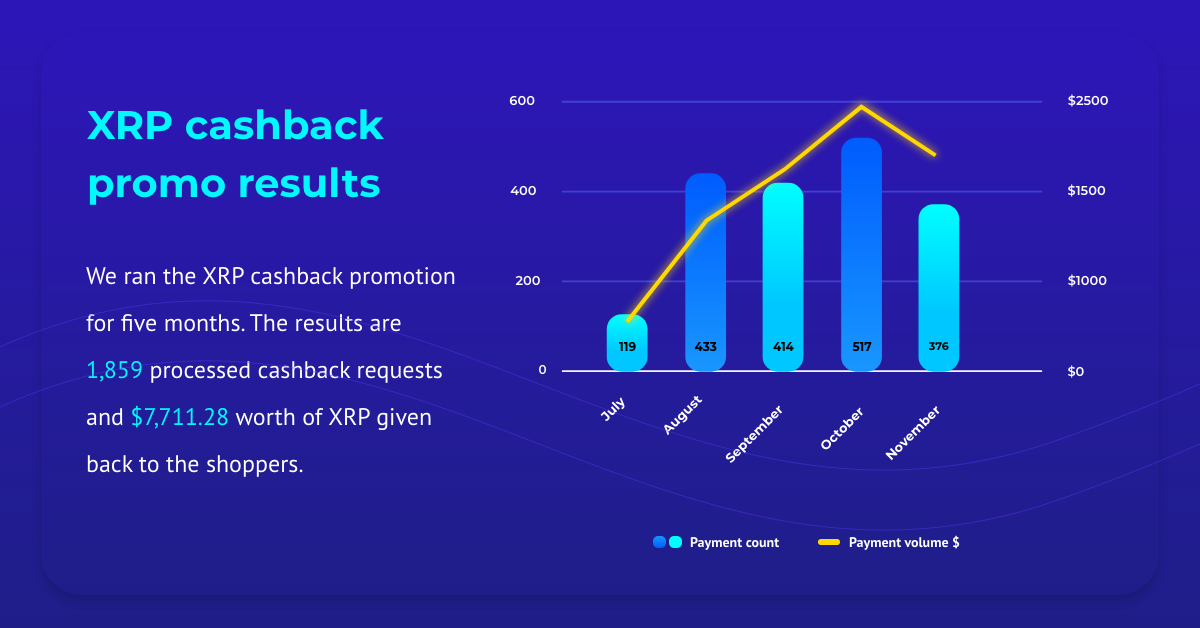 After a short while, we decided to keep the 3% XRP cashback for a longer time, which ended up being from July until December. During those five months of running cashback promotion, we processed 1,859 cashback requests, giving $7,711.28 worth of XRP back to the shoppers.

If you didn’t get a chance to take advantage of this promotion, don’t worry. We plan to bring it back on certain occasions and if you don’t want to miss it, following our Twitter account is the best way you can hear about it.

Coming back to the general statistics, we were also curious to see how big and how small those XRP payments are, as well as what is the average cart size. Is there any trend that we notice, compared to the results of other cryptocurrencies? But if we’d look at the absolutes, the shopping cart ends up averaging in approximately $129 worth in XRP (or around 575 XRP at the time of writing), with the $72 lowest in February and the $214 highest in July.

It is not surprising as the average cart of both Litecoin and Ether payments also average in the range of $100-200. That means crypto shoppers are most likely using cryptocurrencies to pay for several merchandises at once rather than making small orders all the time.

It’s also quite interesting to see how our customers handle XRP after they receive it. By now, it’s a tendency to believe that most merchants immediately convert their crypto earnings to fiat. But, as in most cases, this is not true for XRP as well.

It appears that 35,1% of all XRP orders received are immediately converted to Bitcoin, 31,7% to Euros and 30,1% remains as it is. Meanwhile, the rest 3,1% spreads out across settlements to US dollars (2,1%) and several various altcoins (1%).

Even though almost even on all ends, numbers are quite different if we look from the perspective of payments volume instead of order count. 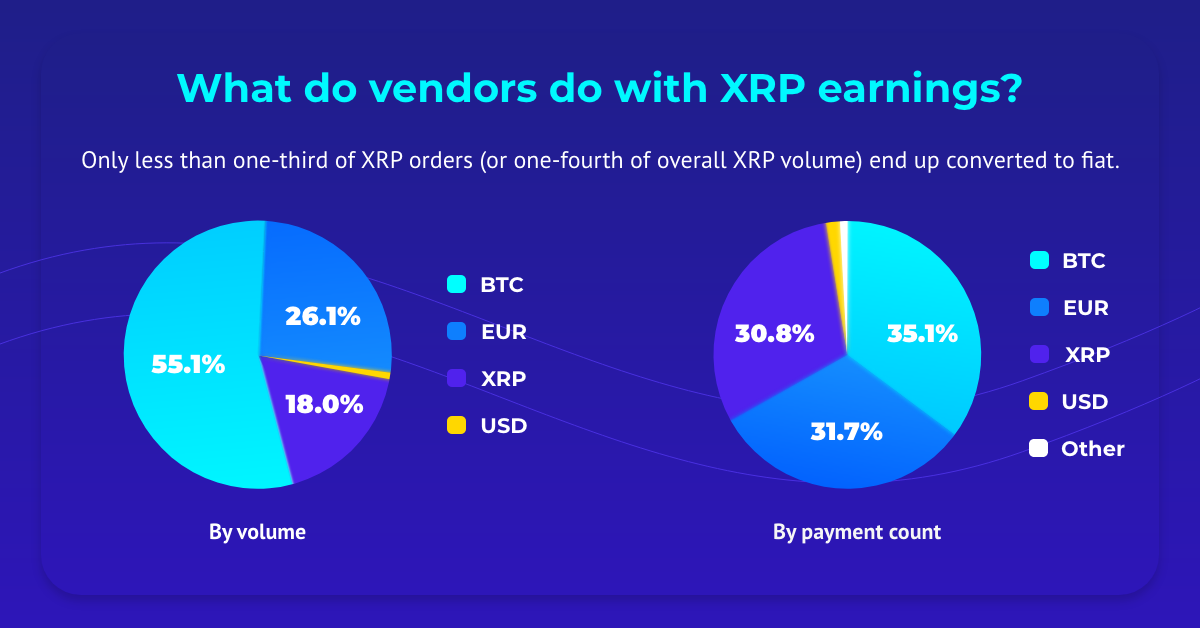 In terms of volume, most of all XRP received by merchants (55,1%) ends up withdrawn in Bitcoin. Withdrawals in Euros also make up a significant portion of XRP pie – 26,1%, to be exact. Only 18% of total XRP volume is withdrawn in its original form, while the remaining 0,8% goes out mostly as US dollars, as well as stablecoin USDT and Ether.

Does it mean XRP will keep the pace?

It’s hard to doubt XRP’s influence in the current crypto environment when we see such rapid growth in such a short time. Will it continue like this? As we all know, anything can happen in this industry, but we will certainly keep an eye on it as we move forward.