Stablecoins explained: what are they and how do they work?

It is no secret that cryptocurrencies aren’t perfect just yet. Major inconveniences that the most vocal sceptics tend to bring up are unpredictable volatility, high fees and long transaction confirmations, especially when the topic revolves around Bitcoin. 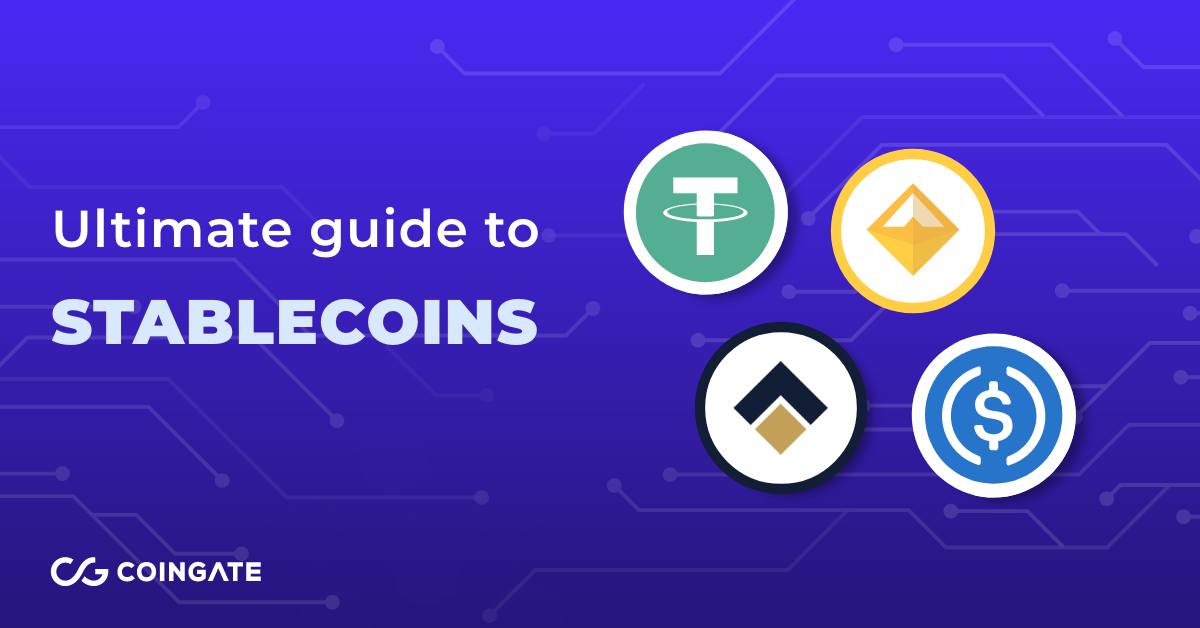 Discussions about Bitcoin and other proof-of-work cryptocurrencies struggling to serve as a medium of exchange has certainly discouraged many businesses to incorporate blockchain payments into their financial operations. However, new ideas emerged, and stablecoins were introduced as a means to deal with the aforementioned issues and improve on existing blockchain-based solutions.

In essence, stablecoin is precisely what it sounds like – a crypto asset that always maintains stable value, yet retains all the properties that make cryptocurrencies tick as they do.

So, how do stablecoins maintain the same course of value?

The way it’s achieved is by collateralizing other real-world assets and pairing the stablecoin’s value to them. As such, the value of stablecoins should never exceed the collateral in reserve, and therefore can (in most cases) be exchanged to the assets they’re pegged to at any time.

Also, it’s important to know that stablecoins are nor minable neither pre-mined. Instead, their total supply is always changing and reacting to the movements in the market. In order to control inflation, coins are burned when exchanged to the pegged asset. Likewise, when an asset is collateralized, newly created stablecoins enter the market.

Such an architecture allows traders, businesses and casual individuals to benefit from the properties of traditional digital currencies (e.g., low cost, high-speed, secure transactions) while eliminating the issue of highly volatile nature that most cryptocurrencies inherit.

Several different types of stablecoins currently exist. Even though the underlying principle is the same, the main difference is how a particular stablecoin maintains its value.

As the name suggests, fiat-backed stablecoins are pegged to a government-issued currency like US dollars. That means the circulating supply of dollar-pegged stablecoins like Tether (USDT), TrueUSD (TUSD) or USD Coin (USDC) should always be covered at 1:1 ratio with real US dollars. 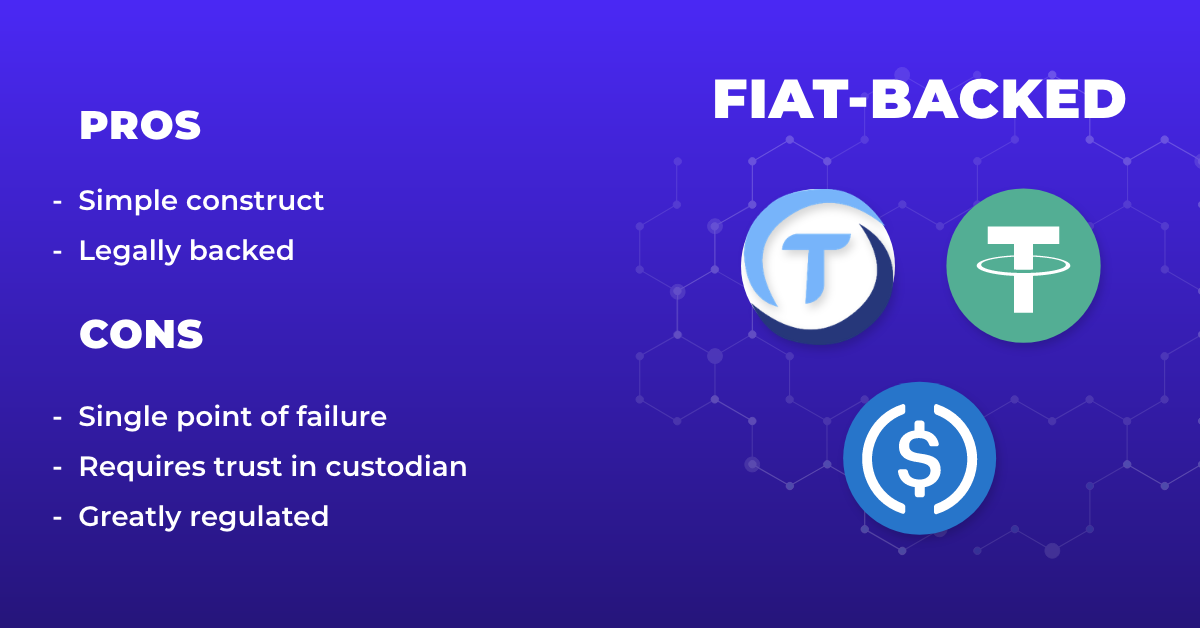 If fiat-pegged stablecoin ends up exchanged back to the US dollar, then that coin is burned out of existence. Likewise, by collateralizing fiat, you’d create and add more stablecoins to the total supply.

However, since fiat-backed stablecoin is an off-chain solution, and its collateral is held somewhere outside of the blockchain, it requires centralized governance and external audits to function properly and for a custodian to be deemed trustworthy. Although it sounds counter-intuitive if we agree to strive for decentralization, it is the most simple and easiest way to preserve strong stability.

This type of coin could also be pegged to a whole basket of fiat currencies. For example, Libra developed by Facebook intends to be just that – a stablecoin backed with several fiat currencies at once.

As far as we know, Libra would be made out of 50% United States dollar, 18% Euro, 14% Japanese yen, 11% Pound sterling and 7% Singapore dollar. However, such a massive project already put all lawmakers across the world on their toes, so we’re yet to see how it plays out.

Unlike other types of stablecoins, commodity-collateralized stablecoins are pegged to the value of physical things like precious metals, oil and, theoretically, everything else. Since holders of such coins have recourse to a tangible asset that is backed by real value, they can (usually) use them to redeem these commodities at any time. 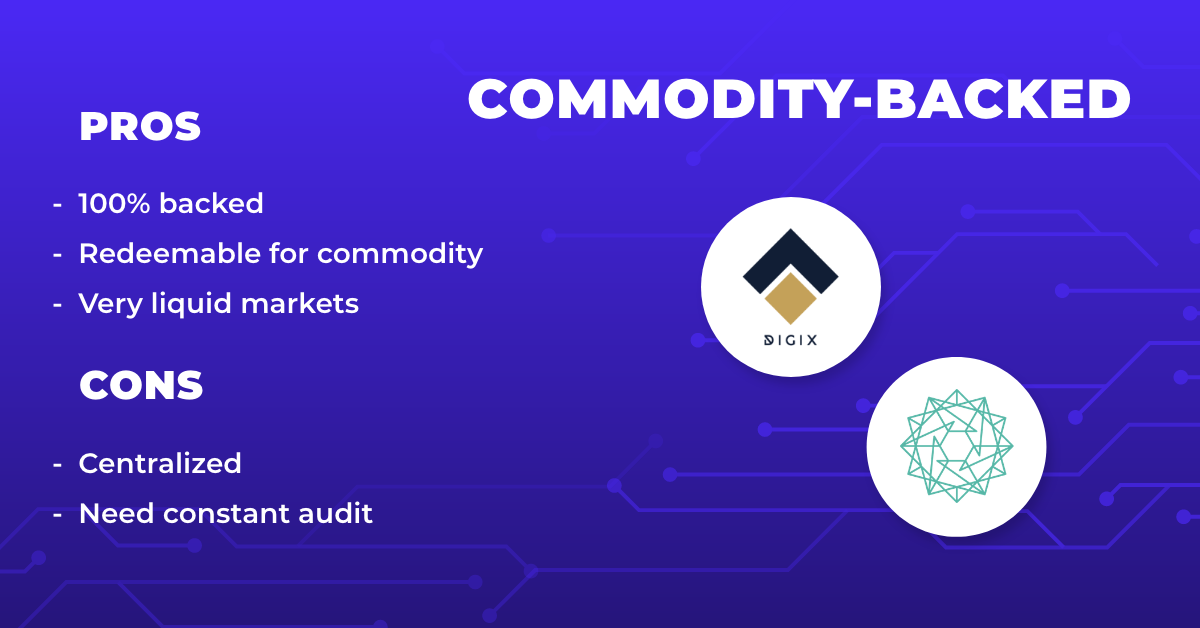 There are several examples of such stablecoins, for example, Digix Gold Token (DGX), a gold-backed stablecoin where one coin represents 1 gram of gold that you can redeem at the physical location.

In fact, even governments attempt to issue their own commodity-backed coins, just like Venezuela did.

In February 2018, Venezuela launched its oil-backed digital asset called Petro. According to the officials, each coin represents a barrel of oil owned by the country. Eventually, Venezuela plans to issue even more stablecoins which would be backed by the country’s gold and mineral reserves.

Less popular and more inflatable stablecoins are backed by nothing else but cryptocurrencies themselves. The key property of crypto-backed stablecoins is that such stablecoins require much higher collateral of 200% and more.

It is necessary in case the cryptocurrency which maintains the value of a stablecoin significantly drops in value. High collateral covers the stablecoin’s peg if such a situation arises. 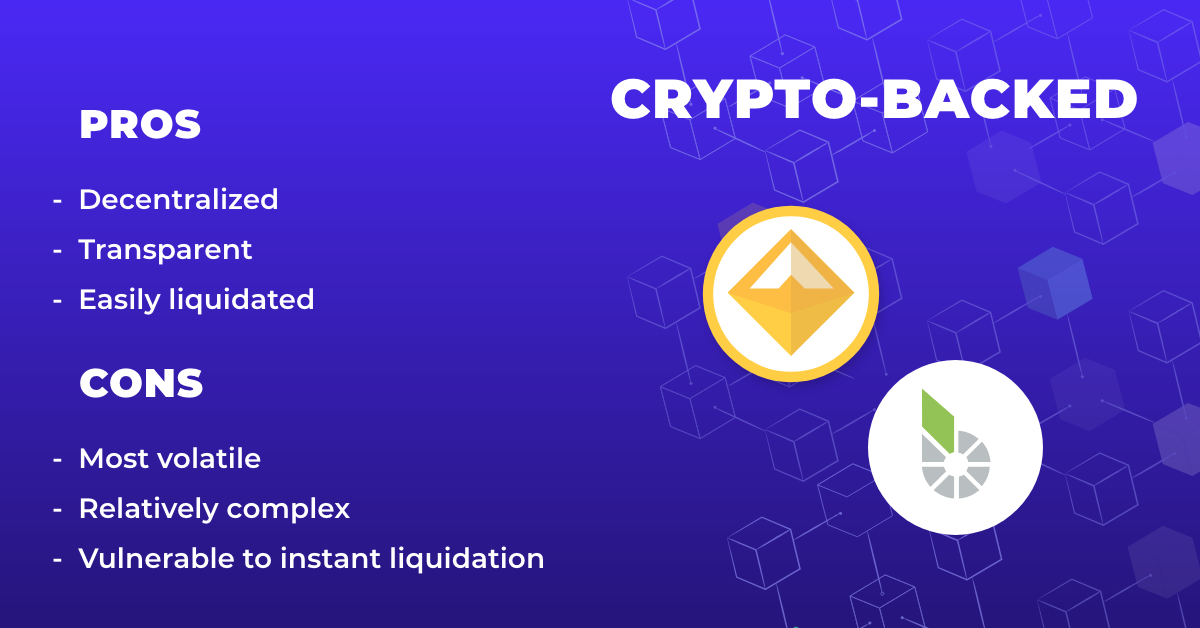 On the other hand, crypto-backed stablecoins are on-chain solutions. That means they are fully decentralized and transparent for everyone to see what’s under the hood, also provide liquidity on-demand.

Dai is one of them. Since its creation, it was an Ether-backed stablecoin soft-pegged to US dollar, meaning that it maintained the course of US dollar by collateralizing Ether. If you wanted to create Dai, you would have to deposit Ether into a “collateralized debt position,” which is essentially a smart contract.

However, with a recent upgrade, Dai can now be collateralized with multiple digital assets. A previous, single collateral version of Dai is now called Sai and is referred to as a first-generation stablecoin.

Stablecoins not backed by anything (Seigniorage-style)

There is one more type of stablecoins that we didn’t discuss yet, and that’s so-called Seigniorage-style or algorithmic coins which are not backed by anything at all. 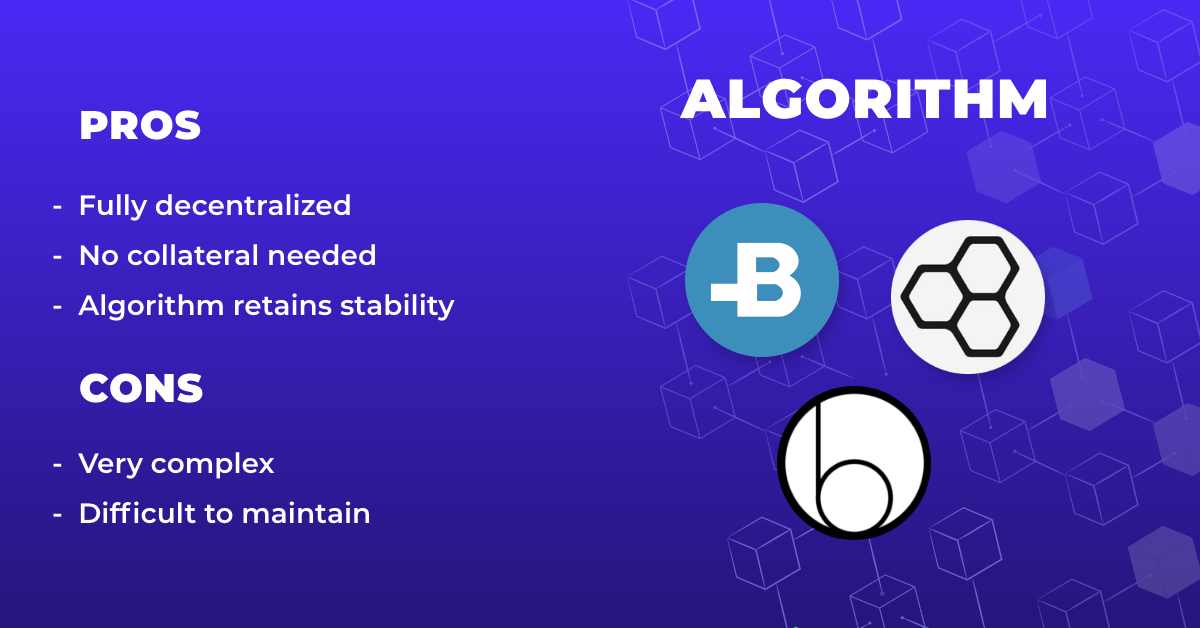 Seigniorage-style coins are governed with the help of complex algorithms. In simple words, if the total demand for the crypto assets increases, new supply of stablecoins are automatically created and vice versa, as a result bringing the price back to predetermined stable levels.

Even though there are no good examples of perfectly functioning Seigniorage-style stablecoins, they do get attention from curious crypto communities. Until now, the Basis project showed the most potential to create a functioning algorithmic stablecoin. However, the project had to be shut down due to several reasons focused on complying with US securities regulation.

So, are stablecoins the future of cryptocurrencies?

Stablecoins are relatively new in the blockchain industry, and we are yet to explore their full potential and use cases. Even though we already can reap the benefits of currently operating stablecoins, we will surely see a broader variety of them emerging in the upcoming years.