What is the best cryptocurrency of them all?

Spoiler alert – there is no right answer. Although, some may argue that it could be Bitcoin solely because, at the moment, it is boasting of 67.7% dominance in the global crypto market. 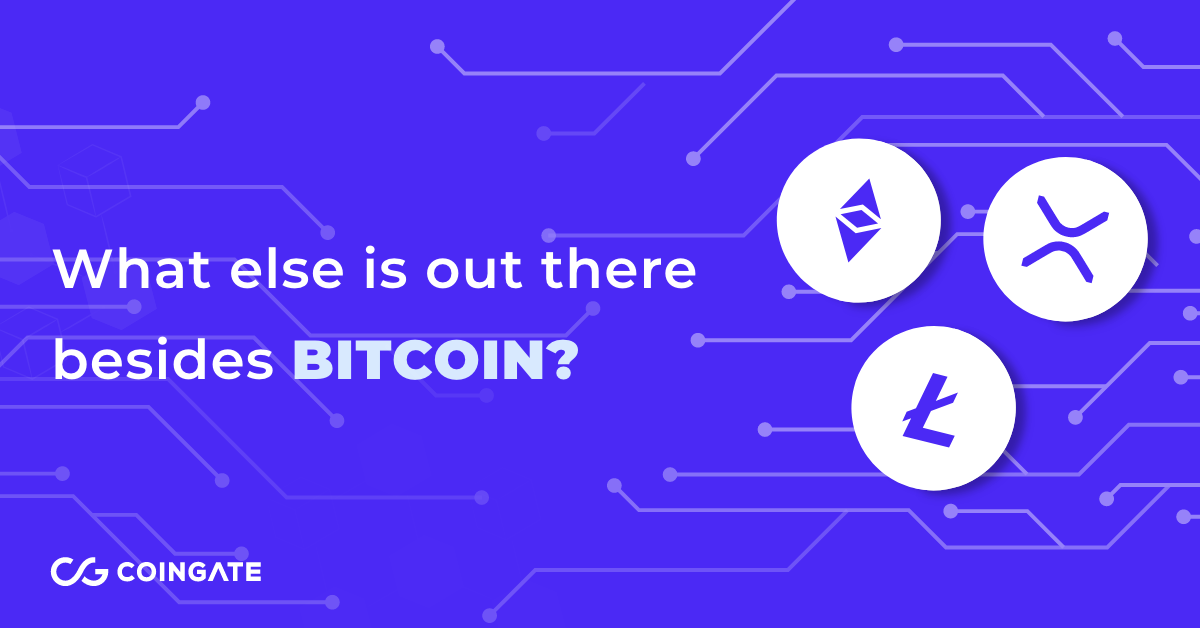 Bitcoin is likely to retain this top position for quite some time. However, market dominance is not the best or the only indicator we should rely on when evaluating other blockchain projects.

Even though Bitcoin is dominating the market by a huge margin, it shouldn’t suggest that all of 2928 cryptocurrencies listed on CoinMarketCap are somehow worse, or don’t have anything more to offer than Bitcoin.

In fact, some digital assets that came into existence after Bitcoin function in a very different way and show huge potential in uses cases that the leader of them all cannot always serve as well. And, even though many believe there’s a never-ending rivalry between all cryptocurrencies, that is not always the case.

So, this time, we will explore the very top of that list mentioned earlier and see what other digital assets than Bitcoin show the most promise, explain how they can co-exist with its ideological predecessor, and why it is a good idea to keep an eye on them.

Litecoin, a cousin of Bitcoin

Litecoin’s blockchain went online a few years after Bitcoin, on October 13, 2011. Created by a computer scientist Charlie Lee, Litecoin strongly resembled Bitcoin in many ways and is often considered to be a lighter version of Bitcoin or the silver of cryptocurrencies. 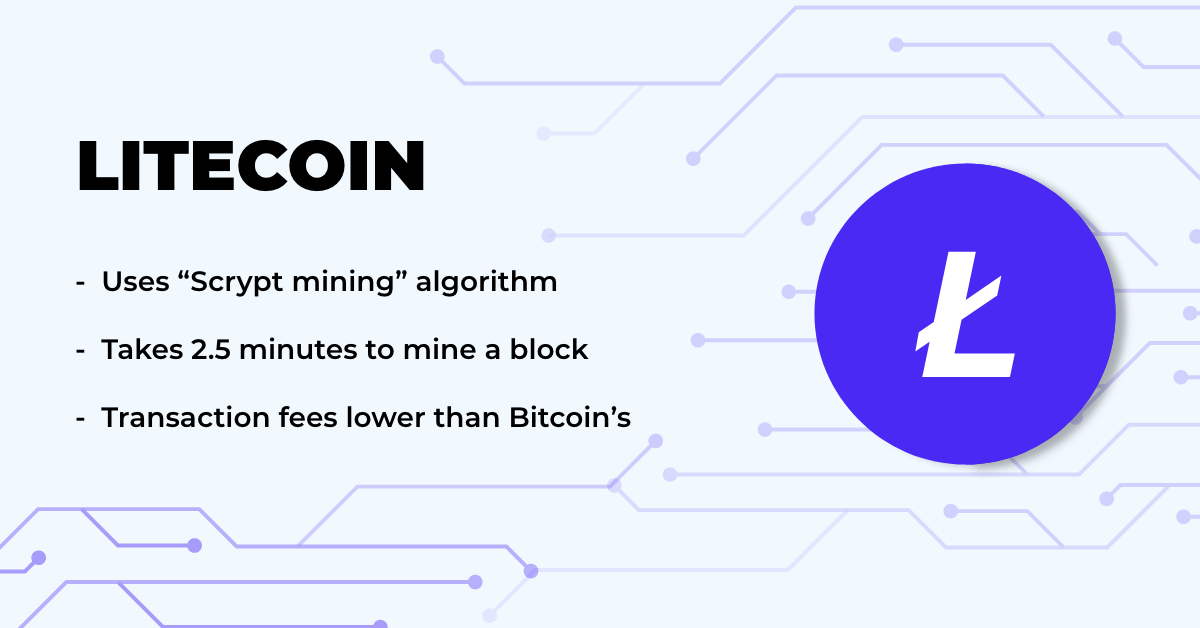 In general, Bitcoin and Litecoin have very strong similarities. Both use Proof-of-Work mining protocol, both have a fixed supply of coins, and both distribute mining rewards in a similar fashion. However, the two most popular cryptocurrencies to date are bound to have some differences.

And there are. For example, Bitcoin uses SHA-256 algorithm for block hashing, which heavily relies on computing power, whereas Litecoin takes advantage of what is called “Scrypt mining” algorithm which does not rely that much on processing power as it does on the memory. As a result, mining Litecoin is considered easier.

Which leads to the second difference – Litecoin’s transaction fees are lower than Bitcoin’s. Currently, the average transaction cost revolves around 0.00053 LTC, or $0.073, compared to Bitcoin’s approximate $0.30.

Learn how Litecoin performs as a currency for payments

Lastly, Litecoin is faster – it takes around 2.5 minutes to mine a block of transactions, where the Bitcoin network takes at least 10 minutes to perform the same task.

Other than this, Litecoin is almost identical to Bitcoin. As a result, both are being used for the same purpose – either as a means of exchange, or a store of value.

If Bitcoin and Litecoin share some key similarities, XRP is an entirely different thing. Created by a company named Ripple Labs in 2012, XRP is a native token run on open-source Ripple protocol consensus algorithm (RPCA), which works very differently than proof-of-work blockchains. 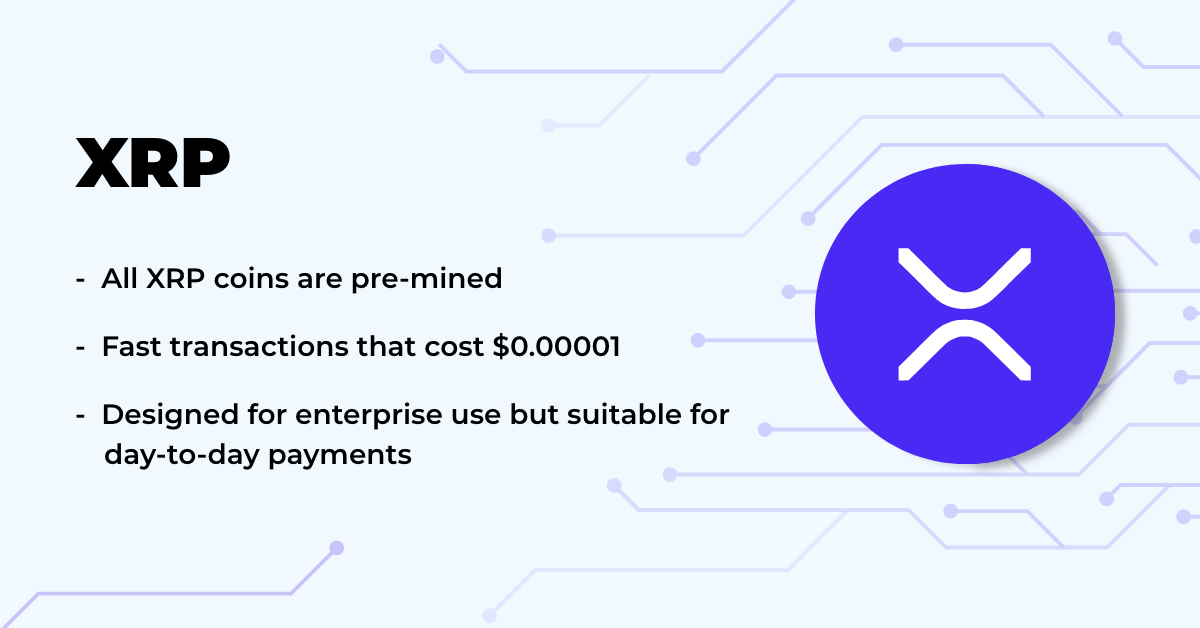 First of all, all XRP coins (100 million of them) are pre-mined, meaning that XRP does not rely on huge amounts of electricity like Bitcoin to validate transactions. Instead, XRP records are maintained on a common shared ledger, which is a distributed database that stores information about all accounts. The network itself is managed by numerous independent validating servers that always compare transaction records between themselves.

As long as all the nodes are in agreement, the transactions are good to go. And, because there is no mining involved, it results in extremely fast transactions that cost just a fraction of a penny. To be exact, a payment in XRP would take 4 seconds to execute and cost only $0.00001. In fact, the transactions could theoretically cost nothing, but the minimum limit is set to prevent DDoS attacks.

Pre-mined coins also mean that the XRP distribution is different. Most of XRP are kept in a company’s escrow account, whereas each month around 1 billion tokens are programmed to be released by an in-built smart contract. If there’s a portion of XRP unused during a particular month, that portion will be sent back to the escrow account, which ensures there is no oversupply of XRP at any time.

Obviously, XRP is very different from Bitcoin, and as such, it has different use cases. XRP is used as a mediator for lowering commission of currency exchange and executing fast international transactions. Even though the ledger is mainly built for enterprise use and is utilized by banks and payment networks as settlement and remittance infrastructure technology (just like SWIFT), it is also designed to be used as a day-to-day payment network.

In November 2013, Vitalik Buterin published the Ethereum whitepaper and introduced new cryptocurrency called Ether. Unlike Bitcoin, Ethereum blockchain is dedicated to running the programming code of any decentralized application. 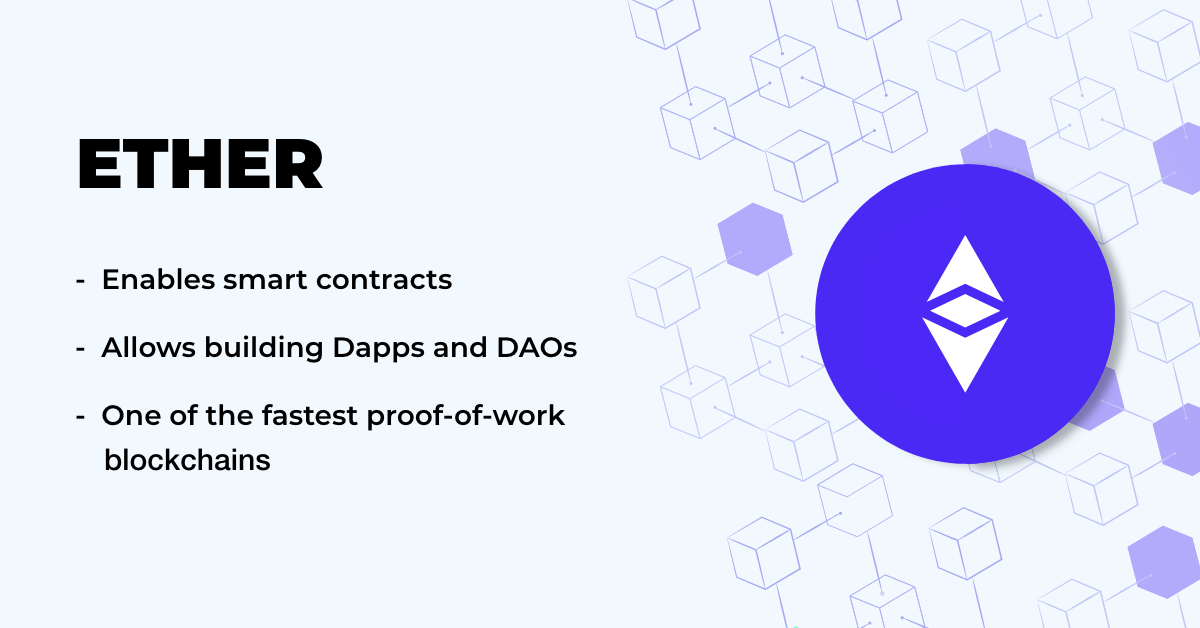 It takes advantage of smart contracts, which are basically codes that automatically execute predetermined functions when specific conditions are met. Smart contracts can facilitate the exchange of anything of value, such as money, property, content, shares, and so on.

As a result, the Ethereum network allows using virtually any programming language to create decentralized applications (Dapps) and decentralized autonomous organizations (DAO), which operate autonomously and without any involvement of 3rd parties. Moreover, it provides all means to create, program and use your own tokens.

So, how does Ether fit in all of this? Well, it is mostly used for executing smart contracts as they always require “gas” to pay the fee. Ether is also used for covering transactions costs and paying for services provided on the network.

How is Ether being used as currency for payments?

Speaking of costs, you’ll pay around 0.12$ to make a transaction that will be confirmed on the blockchain within 20 seconds, meaning that Ethereum is currently one of the faster proof-of-work blockchains in the market.

While Bitcoin is quite limited to just being peer-to-peer network, Ethereum allows building virtually anything you can possibly imagine, which makes Ethereum blockchain exceptionally flexible.

What do all these currencies have in common?

Despite having different purposes and use cases, these cryptocurrencies have one thing in common – all of them can be used to pay for goods and services online, whether you want to buy a new video game, take a flight to abroad country, protect your privacy with VPN, host your website, or else.

It’s not only because cryptocurrencies are slowly crawling towards mass adoption. In fact, paying with digital assets pose many benefits over conventional payment methods.

Not only do you often get better deals when paying with cryptocurrency, you also get more privacy, faster and cheaper transactions (if making a cross-border payment) and, in some cases, accessibility to services and merchandise that would otherwise be off-limits if paying with bank transfer or credit card.

So, where can I buy these digital assets?

You can do it right here at CoinGate. Moreover, you have plenty of different payment options to choose from. Learn all the ways you can buy cryptocurrencies at CoinGate and choose a method that suits you best.

Already experienced trader? Take advantage of our referral program and earn a commission with each active trader you bring to CoinGate!