CryptoRecycle: how to HODL and SPEND at the same time

HODL is a term often used to describe presumably the best strategy for those who invest in cryptocurrencies. But what if we told you this hodling behavior harms the whole industry? 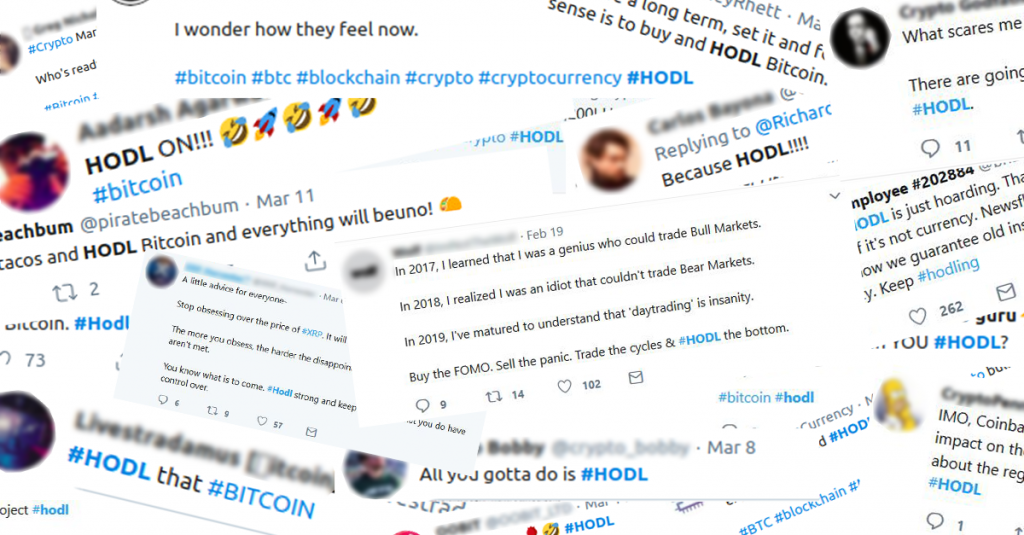 The word hodl is still widespread, even though it has been a meme for six years now. The term itself came from the funniest drunken rant that went viral in 2013 on BitcoinTalk.org forum, carrying the misspelled title “I AM HODLING.”

Long story short, a guy admitted of selling his Bitcoin when its price was at the lowest. The reason is that everyone immediately starts panicking, so he breaks, even though at first he tried holding the asset until the value raises. The thread quickly became viral, inspiring many to patiently wait for the long-term profits.

Since then, many started using the misspelled hodl to refer to an investment strategy, claiming they believe in the bright future while comparing Bitcoin to gold. However, Bitcoin wasn’t meant to just passively store the value.

A true purpose of Bitcoin

The Bitcoin Whitepaper by Satoshi Nakamoto (2008)

When Satoshi Nakamoto created Bitcoin as a new type of currency, he wished for it to be decentralized, free and accessible for everyone, no matter what the political or economic situation is. Until this day, Bitcoin still allows everyone to participate in a global economy freely, process payments faster and cheaper without being dependent on intermediaries like governments and banks.

The brilliant technology inspired both those who wanted to use it for the intended purpose and those who saw its tremendous potential, recognizing it as a great investment tool. While some found trading the most profitable way to go, others chose to hodl instead, which itself is not necessarily a bad thing. It merely decreases the amount of Bitcoin circulating, which results in lower available supply. If the current demand is high, you might indeed make a profit that way.

But what would happen if everyone suddenly decides that hodling is the best course of action? For the economy to function healthily, the currency has to actively serve as a means of payment, or a medium of exchange. If everyone would only hodl, Bitcoin would lose both value and purpose, meaning there would be no economy to grow in the first place. The asset would have no liquidity, utility, acceptance or real use cases. Therefore there would be no point in using it at all.

Evidently, the sole mentality of hodling can’t be healthy for a currency that was intended for transferring value. Thus the strategies should evolve into something more productive and beneficial to every Bitcoin network participant, or any digital asset for that matter. So, for cryptocurrencies to reach their full potential, hodling eventually should switch to spending.

Is Bitcoin suitable as a currency for payments?

Some are confident that at the moment, digital coins are not good enough for spending. The arguments for it differ – low TPS, high transaction costs, price volatility, and other commonly used misconceptions. Moreover, due to its inherent anonymity, some still believe that cryptocurrencies are something only criminals would use, which was proven to be false repeatedly.

Despite the widely prevalent oversights, digital money is becoming a rival to traditional payment methods. With the rise of cryptocurrency payment processors that adopt the latest technologies like the Lightning Network, the issues mentioned earlier become obsolete. In fact, nowadays Bitcoin attracts more people and businesses than ever. According to the Statista data, by Q4 of 2018, there were over 32 million Bitcoin wallets with more than 7 million active network participants. That’s 30% more wallets comparing to the same period in 2017.

Furthermore, Coinmap findings indicate that the number of merchants accepting Bitcoin has surged by more than 700% within the last six years, further pushing Bitcoin as a reasonable payment option. And just recently, a huge supermarket chain Kroger announced their plans to drop Visa due to enormously high fees and possibly leverage the Bitcoin Lightning Network technology instead. According to Cointelegraph, such a large company accepting Bitcoin payments could become a tipping point in the ignition of its adoption.

However, due to a large number of hodlers and lack of spenders, Bitcoin and other cryptocurrencies are stuck in a vicious circle of misapprehension between merchants and crypto communities. The situation reminds of a “chicken and egg” paradox. It’s not clear whether we have to wait for broader Bitcoin acceptance before people are willing to pay with it or use it for payments more often so businesses would be keener to accepting cryptocurrency payments in the first place.

It all comes to a point when a regular user still has doubts about spending digital assets as intended just because they can suddenly raise in value, which would result in a lost opportunity to “cash out.” Meanwhile, the fear and a passive waiting for the exponential growth of crypto economies slows down the adoption speed.

The fact remains – long-term hodling discourages both new and old Bitcoiners of using the asset as intended – transacting peer-to-peer. In such a scenario, Bitcoin becomes viable only for market speculators that have a single goal – making a profit.

But is there a solution that would make cryptocurrencies attractive both as an investment opportunity and digital cash for spending?

CryptoRecycle is a methodology best described as “spend and replace.” It means that you always keep Bitcoin moving by spending it at the shops and immediately rebuying the same amount you’ve just paid. It unites both hodling (investing and waiting) and spending (using crypto for payments) into a single strategy. This way, a user boosts the market capitalization by converting fiat currency into a digital asset. Such methodology helps to create an economy that accelerates the adoption of Bitcoin and benefits the network’s growth at the same time. 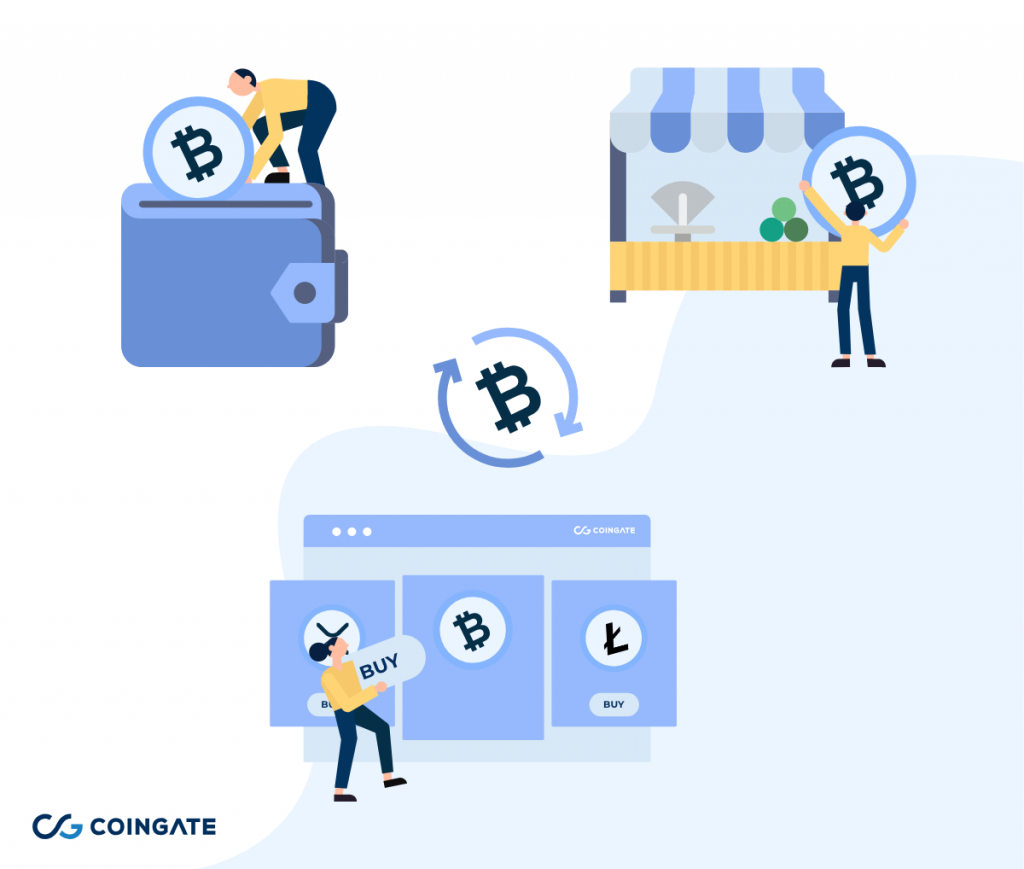 An example: Peter is a firm believer in Bitcoin, so he holds his savings in BTC. However, he also spends it whenever it’s possible. One day, Peter realizes that he needs a new VPN subscription, so he buys a 3-year VPN plan for 100 Euros worth of Bitcoin. After that, he immediately invests 100 Euros in buying back the same amount of Bitcoin he just spent on VPN.

As a result, Peter successfully paid his merchant in just 10 minutes without ever converting to fiat. At the same time, he replenished his Bitcoin and created more demand for it in the process, which gives value and utility to the coin. It goes full circle, leaving merchants with fewer reasons not to accept Bitcoin, and Peter with the same amount of Bitcoin he had in the beginning.

Not for Bitcoin only

Now, some might say: “But I don’t hodl Bitcoin! I much rather prefer the technology of Tron/XRP/Ether, but these assets are not even made for payments”. It would be fair enough to point out that not all cryptocurrencies were initially made for shopping. However, it does not mean they cannot efficiently take that role anyway.

For example, XRP was created as a digital asset for financial institutions to source liquidity using the xRapid platform. Therefore, it is no surprise that XRP community hodls until big corporations will start using xRapid and the digital asset will increase in price. Few seem to acknowledge the fact that adding a new use-case for it would directly impact its technological adoption.

In this case, the speed and low costs of XRP ledger could also be utilized for peer-to-peer payments and everyday usage, like purchasing things online. In return, it would help the ledger’s decentralization, showcase the increasing utility of a crypto asset and provide an active, liquid market. 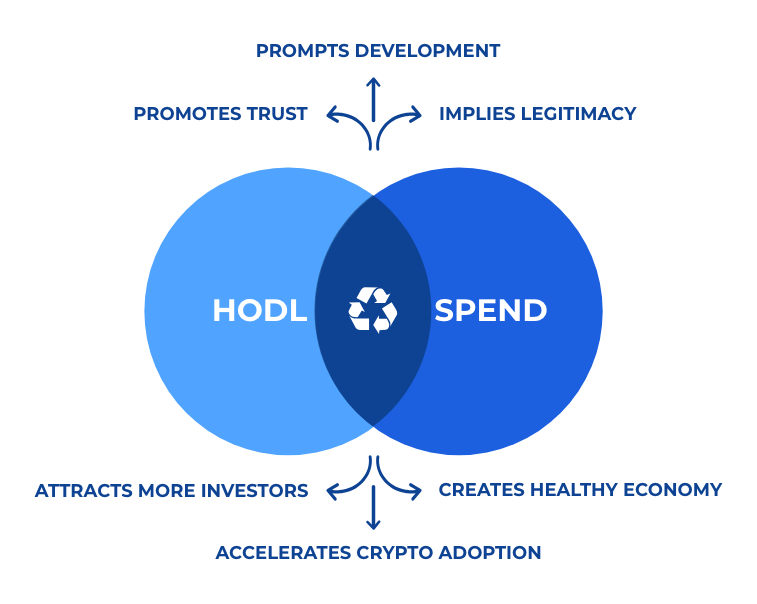 CryptoRecycle is a universal strategy for all types of coins. Whatever is the end goal of developers, users or the community, the overall utility is what gives the asset value. Here are the ways how “spend and replace” cycle is more beneficial than just hodling:

Invest and use at the same time

There is no arguing that hodling, as an investment strategy, can be profitable in the long-run. However, the overall success of any coin mostly depends on those people that actively participate in the economy and use cryptocurrencies as intended.

Good news is, you can indeed hodl your investment and spend it at the same time if you add rebuying in the mix. Using an upgraded formula we call CryptoRecycle, you can fulfill the purpose of hodling for profits and still use digital assets for payments, giving cryptocurrencies a meaning and favoring the whole industry in the process.

But most importantly, you, as a motivated investor wanting to keep the economy healthy and the prices high, ultimately benefit the most.