It is our pleasure to announce that Nano has been integrated as our newest native cryptocurrency! Any shopper can now enjoy the benefits of extremely fast, fee-less Nano transactions when paying to merchants using CoinGate. 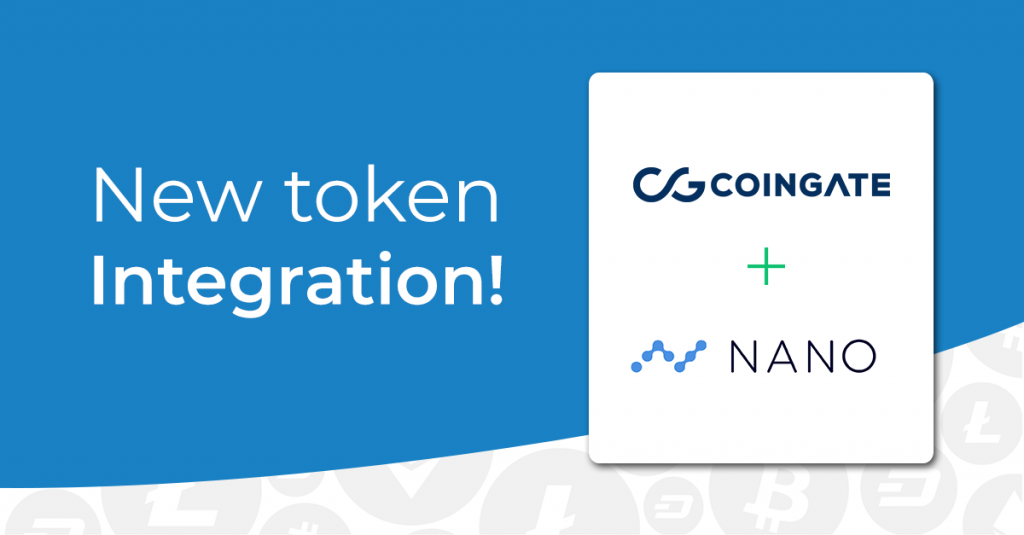 Without any doubt, the news is fantastic for both the Nano community and our merchants. Anyone who owns Nano can now shop at more than 4,000 merchants that use our payment gateway! We know it is a vast community, and our merchants will certainly appreciate thousands of new online shoppers!

To get you started with spending Nano, you can try our featured merchants: MMOGA, CoolWallet, BitLaunch, ThunderPick, Patchion, or donate to LibreOffice. For more, here is a list of our loyal merchants that participated in our Bitcoin Lightning Network trials. If you need hosting services or just want to buy a video game, you are most definitely in luck!

Not all crypto-accepting merchants know about Nano yet. However, there are plenty of compelling reasons why we chose Nano as the latest addition to our stack of supported blockchains.

Why Nano is a great fit for CoinGate

Nano is a global currency developed purely for the purpose of making peer-to-peer payments. As much as we like Bitcoin and Litecoin, this cryptocurrency tackles many of the issues that major cryptocurrencies face.

Here are the main attributes that make it such a unique network:

The initial design of the Nano blockchain makes it capable of scaling infinitely. In order to make it possible, the protocol uses a block-lattice architecture. It distributes the ledger across each node, so every account has its own blockchain. These individual block-accounts track their own transactions and account balances independently from the public ledger.

Such architecture theoretically solves the block size issue that Bitcoin currently struggles with. On top of that, it allows infinite scalability without increasing the time or the cost of transactions.

Finalised transactions appear on a public historical ledger which keeps track of all account balances on the network. However, unlike on the Bitcoin blockchain, miners are obsolete with Nano. That is because every user verifies their own transactions using their own computational power.

Instead of being mined, Nano was initially distributed via faucets using CAPTCHA tests in order to make the distribution as fair as possible. As a result, now there is a fixed amount of 133,248,289 NANO in circulation, actively traded across such exchanges like Binance, BitZ, Kucoin and numerous others.

The Nano network has processed millions of transactions in the last three years. And yet, it remains extremely lightweight with a ledger size of just around 8 GB. The network is more environmentally friendly than the current alternatives, as it does not require much power to run a node at all. The average power cost of transaction on Nano blockchain is 0.112Wh, which is equivalent to around 0.005$.

These transactions are also very fast, due to the asynchronous nature of the block lattice data structure. Check out this explanation for a more in-depth understanding.

Nano uses delegated Proof of Stake (dPoS) form of consensus to solve malicious occurrences on the network. Safety is ensured by active nodes who automatically cast their votes for the first transaction that appears on the network in case a conflict arises.

The strength of the vote is determined by how much Nano the account owns, or has delegated to it. Since it is very costly to gather more than 50% of Nano supply, and votes occur instantaneously, it is difficult to conceive of a way to attack the network that does not cost the attacker more than they stand to gain.

You can store the cryptocurrency itself in secured mobile and desktop wallets that share data across multiple devices. In fact, you can even send it to another person using the Telegram app! You are also able to store it in Ledger Nano S hardware wallet if you wish to secure it offline.

All these features add up to the incredible potential Nano has for becoming a widely used solution for micro-payments. That is why we wish more people would focus towards such decentralised networks like Nano that carry the potential to solve the current inefficiencies found in other cryptocurrencies. After all, we are all united by a common goal of achieving a widespread cryptocurrency use.

However, cryptocurrencies are still in their early stages of adoption, and most merchants in the world are yet to accept crypto. But if you are a merchant who wants to be prepared for the future, we suggest you peek at our ultimate guide on how and why cryptocurrencies not only make sense but also benefit your business. It might surprise you how easy it is to accept cryptocurrencies such as Bitcoin, Ethereum, Litecoin, and, of course, Nano, among many others.