What is Lightning Network? Intro to Bitcoin Lightning payments

In 2018, we launched Lightning Network payments on our test shop for the first time. Now, all of our merchants accept Bitcoin Lightning payments by default. But what is Lightning Network and why is it amazing for Bitcoin and cryptocurrency payments in general?

For quite some time Bitcoin has been facing the issue of scaling. With the current capacity of 7-12 transactions per second, many are wondering- how can the network grow to accommodate heavy usage and compete with corporate giants such as Visa?

In its current technological state, Bitcoin itself cannot actually scale far beyond current capacity. Luckily, some clever minds working on the protocol came up with an upgrade called the “Segregated Witness“, which was implemented in August after quite some debates and disputes.

SegWit introduced a number of scalability improvements and solved issues such as transaction malleability. Yet, most importantly, SegWit made it possible for some very exciting future upgrades to be implemented across the Bitcoin network.

Lightning Network (or simply LN) is one of those upgrades, and it is widely considered to be the next major upgrade to the Bitcoin network. LN is a so-called “second layer” protocol that introduces some very, very cool features without affecting the operations and integrity on the main Bitcoin network layer.

In our humble but confident opinion, although still at its early stages, this technology will eventually allow Bitcoin to be much quicker, lighter and efficient.

So what does Lightning Network actually do?

To put it briefly, Lightning Network enables much faster and cheaper transactions in high volumes between users, without the need for network confirmations.

In simple words, LN connects users (nodes) in a web of so-called “payment channels” independent of the actual Bitcoin network. Using these channels, transactions can be made by users (nodes) “off-chain“.

This extends to a complex and interconnected network where users are connected with other users across many interlinked channels (see how the web looks in real-time and read a more in-depth guide to how Lightning Payments work here or here). At the time of writing, there were over 2,500 active LN nodes and over 7,500 channels between them on the Bitcoin Lightning Network mainnet.

The transactions made over the Lightning Network are verified and maintained by LN nodes, but they do not have to be immediately settled on the Bitcoin network itself. So, Alice can send some bitcoins to Bob, then Bob can send some back to Alice, without paying miner fees and waiting for confirmations.

Once Alice and Bob are done transacting between themselves, they can close the channel and settle the resulting net amount on the Bitcoin network.

Lightning Network has some really important effects and implications on Bitcoin:

Why has CoinGate implemented Lightning Network?

Since our inception in 2014, CoinGate was aiming to keep close to the community and the main ideas behind Bitcoin. Lightning Network, although still a fresh new technology, fits exactly in our vision of what Bitcoin should be in the future.

In addition, we believe in being responsible towards the network and its health, and so we have been batching our transactions since 2015, and were among the first cryptocurrency payment processors to integrate SegWit in December 2017. 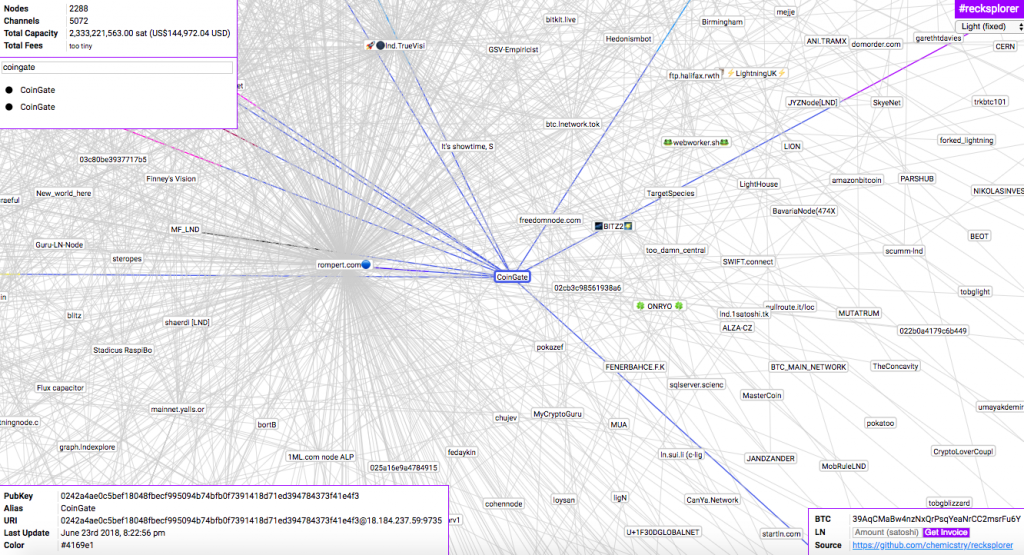 6-7 transactions in every Bitcoin block are related to CoinGate. To us, this is an amazing achievement, because we already feel a significant part of the entire ecosystem. Lightning Network will enable us to put even less strain on the network.

And so, we are contributing to the cause by spreading the message and helping others implement Lightning payments.

But our underlying reasoning for launching LN is our strong belief that this technology will have a huge positive impact on Bitcoin as a whole.